What to Know About USC Admissions 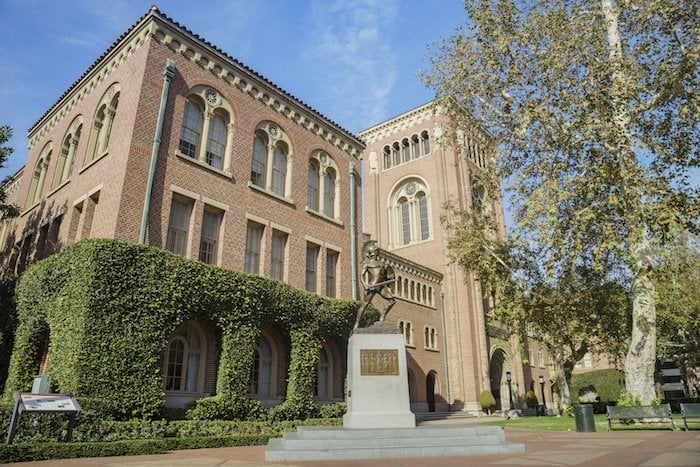 Learn What it Takes to Stand Out at This Top College

The University of Southern California (USC) has been rising in prominence for years now, and after the recent college admissions scandal, the school has gained even more recognition – even though it’s not necessarily the attention the institution was seeking. Outside of the headlines this year, USC is known as a renowned research institution and it will probably find a place on many student’s best fit list of colleges this fall – leaving many applicants with questions about the admissions process this year.

In preparing to apply to USC, it’s important for students to have a clear idea of the school’s history, what their admissions process entails, and what is likely to change following the scandal. Keep reading to learn more about this top college and get a jumpstart on your application.

The Basics
USC is a large research university in Los Angeles that is compromised of 18 professional schools. There are many renowned programs, including top-tier film offerings, a well regarded music program, and a high ranking journalism school. Like other elite colleges, academics are the top criteria when it comes to applying to USC. The university requires either SAT or ACT scores from every applicant as well as a high school transcript, at least one letter of recommendation, and a portfolio, resume, or writing sample if required by major. There are no Early Decision or Early Action options at USC and the regular admissions deadline is January 15.

USC’s History
USC opened in 1880 and was founded by the efforts of Judge Robert M. Widney, who helped secure donations from several key figures including a former governor and several bankers. The school was originally affiliated with the Methodist church but cut all religious ties in 1952. USC’s colors are red and gold and the school’s students and athletes are known as Trojans, epitomized by the Trojan Shine located near the center of campus. USC has a significant impact on Los Angeles’ local economy; it is estimated that students spend $563 million dollars each year. The admissions scandal is not the first controversy USC has faced in recent years; in 2018, an on-campus doctor was forced to resign due to misconduct. The school’s president, C. L. Max Nikias, resigned the same year.

How to Stand Out
Like many selective colleges, USC receives tens of thousands of applications each year. In order to stand out from the pack, applicants must possess a variety of hard and soft factors, including top grades and SAT/ACT scores as well as demonstrated interests and passions. Curious what scores to aim for? For the Class of 2023, the middle 50% SAT ranges for reading and math were 660-740 and 690-790 respectively. The middle 50% ACT English range was 32-35 and the math target was 28-34. The average GPA ranged from 3.70-3.97

It’s also important for students to research the college thoroughly and adequately convey their interest in specific programs and opportunities at USC throughout their application. Students should dedicate a lot of time to their application and edit personal statements and short answer questions thoroughly. It’s essential to be proud of your work and to convey your unique personality and passions to an admissions office, so take time to develop your own authentic voice.

Changes for the Class of 2024
In the aftermath of the college admissions scandal students can expect some changes, particularly for recruited athletes. In the spring USC announced that they were revamping their admissions process for student athletes. The new three-tiered review process will include input from the head coach, the senior sports administrator overseeing the team, and the USC Office of Athletic Compliance. The head coach will also certify in writing that the applicant is in fact being recruited for their athletic abilities.

By learning about prospective institutions and working hard on applications, students can feel confident about the admissions process at USC and other institutions. If you are preparing for application season and looking for expert input, reach out to our team for personalized guidance.