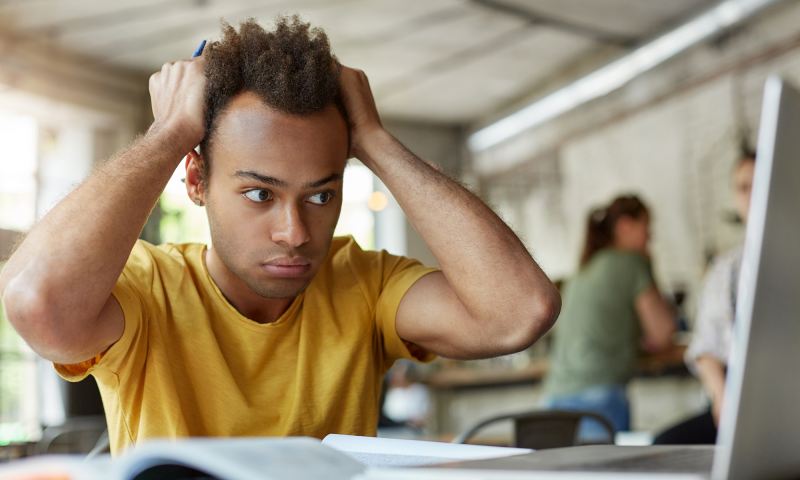 Grammar and Spelling Mistakes to Avoid in Your College Essay

Few things are scarier to students than submitting their college application only to find grammar and spelling mistakes afterward. This can lead to panicked calls to counselors and colleges, asking to resubmit their essays or correct an error. While small grammar and spelling mistakes won’t kill your college admission chances, they can lead to a lot of additional headaches for already stressed-out students.

One of the most important final steps that students should take when applying to college is to carefully read over their application and admissions essays in order to catch any spelling, grammar, or informational mistakes. A polished application makes admissions officers’ lives easier, and attention to detail can help students correct easily avoidable mistakes. A spelling or grammar error alone won’t send an application to the “no” pile, but an essay riddled with errors can come off as sloppy and leave admissions officers wondering how much attention students actually paid to their application. Here are some common grammar and spelling mistakes students should look out for in their college application essays:

Its vs It’s, Your vs You’re, and There vs Their vs They’re

The spelling and usage of these words is one of the most common mistakes that students make in their writing, but the good news is they’re the easiest mistakes to correct. While it may seem tedious, reading your essay out loud is the best way to catch these errors. As an added bonus, it also ensures your writing flows well and is easy to read. Even proofreaders can miss a typo or two, so practice reading your essay aloud and, when in doubt, use a ‘find and replace’ function to search all instances of “there,” “their,” “they’re,” “your,” “you’re,” etc. to double check they’ve all been used correctly.

Its: The possessive form of “it.”

Many students mistakenly use “it’s” as the possessive because of the apostrophe. Carefully read your essays to make sure you’re using the correct form of each. (I.e., “It’s beginning to feel like fall. That tree lost all its leaves!”)

Your: The possessive form of you.

You’re: The contraction of “you are.”

Your is often mistakenly used for “you’re.” When editing your essay, read it out loud and look for spots where you would say “you are.” If “your” is used instead, correct it. (I.e., “You’re going to the costume party, too? What will your costume be?”)

There vs Their vs They’re

Their: Something owned by a group (possessive).

They’re: The contraction of “they are.”

There and their often get switched, with “they’re” sometimes abandoned altogether. Again, read your essay out loud when editing, and look for instances where you use any of these three words – especially where “they are” would be used. (I.e., “There aren’t many flavors to choose from anymore; it looks like they’re scaling back their menu.”)

Peek vs Peak vs Pique

Peek: To look at something.

Peak: The top of a mountain or the highest point of something.

Pique: To provoke interest or curiosity (pique your interest).

Peek and peak can sometimes be confused, but more often than not it’s pique that gets mishandled. Something doesn’t peek or peak your interest. Something “piques your interest.” This phrase is most likely to crop up in your supplement prompts if you’re talking about a course you would be interested in taking at that college, so make sure to use the correct word if opting to use this phrase. (I.e., “I took a peek at the course catalogue and the geology classes really piqued my interest. The professor hiked to the peak of Mount Everest!”)

Punctuation is there for a reason! Many times, in an effort to elevate their writing, students will use long, complex sentences – stuffing as much information as they can into one statement. The lack of appropriate punctuation, like commas, dashes, semicolons, etc., can leave the reader without cues as to where one idea ends and another begins. This can also mess up the flow of your writing and leave the reader confused about the message you’re trying to convey.

Run-on sentences occur when two or more independent clauses (complete sentences) are squashed together without using proper grammar or punctuation. Use commas to separate sentences, items in a series, clauses, and other elements that need to be distinguished. If a sentence is really long, break it up into two separate sentences. You don’t have to fill your essay with complicated language and sentence structure in order for it to sound sophisticated or make an impact.

Run-on: “When I was young I fell out of a tree and broke my arm which you would think would discourage me from climbing but it just solidified my love of the sport and now I rock climb professionally although I still avoid climbing trees!”

Grammatically-correct: “When I was young, I fell out of a tree and broke my arm. You would think that would discourage me from climbing, but it just solidified my love of the sport. Now, I rock climb professionally – although, I still avoid climbing trees!”

See how we broke that sentence up with commas, periods, and dashes? Alternatively, you could throw in a semicolon or break those sentences up even further. The point is to use grammar to distinguish independent clauses so that it doesn’t form one long, sloppy sentence.

On the other hand, avoid fragment – or partial – sentences. Use semicolons and dashes to connect ideas. While fragment sentences are easier to catch – and avoid – in a college essay, students frequently make this mistake in their email correspondences.

Fragment: “By Monday at noon.”

Grammatically-correct: “I’ll have the revised essay to you by Monday at noon.”

Shortening sentences in texting and social media often leads students to use fragment sentences in their emails to admissions officers, like signing an email “looking forward to seeing you at the college fair!” Remember, while this may seem like a full sentence, it lacks a subject (i.e., “I’m”). Always double check that your emails to the admissions office, financial aid office, professors, and any other higher education professionals are formal and free of error.

Commas can be complicated. Everyone knows that. A punctuation mark that’s misused even more frequently, however, is the colon (:). Students will often use this in place of a semicolon (;) or even a period. While a semicolon is used to join two independent clauses together, a colon is used to introduce some element that will amplify or demonstrate examples of the information preceding it.

When to Use a Colon

You can also use a colon to join two independent clauses when the second is used as an explanation or emphasis of the first. (I.e., “My family and I are really excited: we’re visiting Columbia University tomorrow!“) Here, the information following the colon is used to explain and emphasize the information preceding it.

When to Use a Semicolon

Well, it’s a way to elevate your writing by joining two similar ideas or even a way to break up a run-on sentence. (I.e., “I’m hoping to take a few history classes at your college; the class about South American liberators sounds fascinating.” Or “Botany looks like an exciting course; the rainforest section sounds especially intriguing!“)

In both of these examples, you could easily replace the semicolon with a period and it would still be grammatically correct; however, the semicolon allows you to join these two phrases into one sentence so that the second phrase can be used as a continuation of the first. (See what we did there?)

There are a number of spelling errors or typos that often go unnoticed at first because, well, they are actually words! For example, “our” can easily be an “out” typo. “Martial” arts can become “marital” arts. “Bringing” can be mistakenly replaced with “brining,” and so on. While harmless, these kinds of typos and spelling errors can make your essay confusing or sloppy. Again, read your essay slowly and out loud when editing, paying close attention to spelling and usage.

While grammar and spelling mistakes might not necessarily hurt your chances of admission, they can make your essay confusing or sloppy. You want to make your writing as easy to read as possible for an admissions officer who only has a couple minutes to dedicate to each of their hundreds of applicants’ essays. Using grammar correctly will help your writing flow and ensure your admissions officer doesn’t get tripped up over any pesky run-on sentences.

Fixing your grammar and spelling is a quick and easy way to elevate your writing to take your essay to the next level. Knowing you submitted the best application possible, without errors, will alleviate some of that college admissions anxiety and allow you to focus your attention on the next task at hand.

At the end of the day, a second set of eyes is your best asset when proofreading application materials. Ask your college counselor or independent counselor for help writing, spell checking, and proofreading grammar and spelling in your essay before hitting the dreaded ‘submit.’