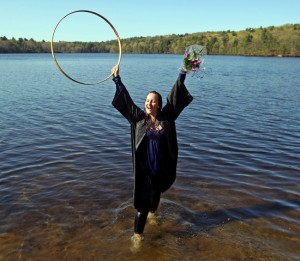 Most commencement exercises are rooted in tradition: wearing school colors, singing the alma mater, flying the campus flag, listening to the valedictorian’s speech, and marching in the staff-led procession. While these historic marks are part of many graduation ceremonies throughout the country, some colleges have their own quirky commencement traditions. Many schools have added a modern-day element, including East Carolina University, Hampton University, and the University of Pennsylvania, which encourage students to Tweet and follow updates on their mobile devices during the actual event. However, there are still others who go way beyond the traditional mortarboard and Pomp and Circumstance to give soon-to-be alumni a truly unique farewell. The team of expert counselors at IvyWise have handpicked five colleges that send students off in memorable fashion.

Wellesley College, Wellesley, MA
Don’t feel too bad for the young woman who shows up to graduation soaked. She probably just won the Annual Hoop Rolling Contest, an annual event that Wellesley College‘s graduating class has taken part in each May since 1895. Donning their graduation attire, Wellesley seniors race on foot while trying to keep a large wooden hoop upright. The winner of this highly competitive race is greeted at the finish line with flowers from the college president before being carried by her classmates to Waban Lake and thrown in. Winners can thank an anonymous Harvard University male for their wet plunge. Legend has it that several decades ago this student disguised himself as a fellow Blue and won the event. Upon the discovery of his true identity the women of Wellesley exacted their revenge by tossing him in the lake. The terms of success promised to the winner have changed with the times  in the early 20th century, it was said that she would be the first to marry; later, victory meant that she would be the first in her class to become a CEO. Presently, winning the race guarantees its winner is the first to achieve success, however she defines it.

Located 12 miles west of Boston, Wellesley College is among the most selective liberal arts colleges in the U.S. An all-women’s school, Wellesley has been committed to the female voice since its founding in 1870 (to be ministered unto but to minister is the school’s motto). Under the school’s full-engagement academic philosophy, students are encouraged to think, act, and contribute to the college on all levels, and they do so by serving on Board of Trustees committees, participating in faculty recruitment, collaborating on research projects with professors, and engaging in strategic planning for the college. In order to expand both its academic and social offerings, Wellesley offers interdisciplinary programs and class cross-registration with nearby schools Babson College, Olin College, Massachusetts Institute of Technology, and Brandeis University. The beautiful 500-acre campus is home to 2,300 students, a private lake, vast forests, a golf course, and beautiful Victorian and Colonial architecture. Wellesley College has drawn the attention of a number of notable fans – alumni include Hillary Rodham Clinton, Diane Sawyer, and Madeline Albright; and commencement speakers have included Toni Morrison, Nora Ephron and Oprah Winfrey.

Rutgers University, New Brunswick, NJ
Students attending Rutgers University take history to heart from day one. For four years after freshman orientation, students avoid walking through the Class of 1902 Memorial Gateway for fear that those who do will not graduate. Upon receiving their diplomas, however, the academic procession streams through the pillars of the gate in celebration. Graduates also pay a visit to the Class of 1877 Cannon in front of the Old Queens campus, the site of the original Queens College, which was later incorporated into Rutgers. Here students break clay pipes over the monument to symbolize their breaking of ties with the school and the end of their youthful inhibition. Although the purpose of the pipe may be lost on many current students, the gesture dates back well over a century to a time when pipe smoking was a popular social habit among undergraduates. Continuing their tour of the pre-revolutionary war campus, the graduates make their mark, literally, by carving their year into one of the bricks at the base of Kirkpatrick Chapel. The brick is placed directly next to the brick of the grandfather class that graduated 50 years prior. Also at the base of the chapel, graduating students plant ivy to represent the shared roots that they have made at Rutgers.

With three campuses throughout the state (New Brunswick, Newark, and Camden), Rutgers is considered the state university of New Jersey. Founded in 1766, the school is one of the oldest higher education institutions in the country and one of only nine schools founded prior to the American Revolution. A large public institution, the university has a diverse student body composed of more than 56,000 undergraduate and graduate students from all 50 states and 125 countries, studying across 175 departments. More than 400 student clubs and organizations give Rutgers students ample opportunity to participate in campus life. Extra-curricular activities could include writing for The Daily Targum (the second-oldest college newspaper), hitting the gridiron to play or cheer at the birthplace of college football, or breaking a world record (Rutgers students currently hold the Guinness World Records for the Largest Gathering of People Dressed as Ninja Turtle and the Largest Gathering of People Dressed as Waldo) Between the system’s three campuses (totaling 2,695 acres), students can enjoy an urban hub with vast social offerings, absorb cosmopolitan culture in a close-knit community, or explore the Northeast’s natural beauty outdoors.

Connecticut College, New London, CT
Graduating seniors at Connecticut College embrace commencement in mind, body, and spirit. The day before graduation, students gather for Baccalaureate, a celebration of the class spiritual diversity. During Baccalaureate, students present readings, prayers, and performances pulled from a variety of backgrounds and traditions, but all focused around the themes of service and gratitude. On graduation day, seniors are presented with an Eastern White Pine sapling, in honor of the school’s seal. Graduates carry the saplings, wrapped in ribbons of CC’s colors, during the processional march. Once they have left campus, students plant their trees wherever life takes them, as a constant reminder of their continuing connection to the college. The school’s motto “Like a tree planted by rivers of water” reiterates this significance. Today, the school’s effort to become a leader in environmental commitment adds a new dimension to the tradition.

Founded a century ago as an alternative to Wesleyan (which had ceased to admit women), Connecticut College is a thriving institution that fosters diverse cultural and intellectual perspectives and a vibrant social community. The campus coves 750-acres in New London, Connecticut and is an arboretum overlooking the Long Island Sound. More than 2,000 male and female enrolled students can enjoy the school’s strong interdisciplinary curriculum, extensive international offerings (intensive language study, overseas internships, a 50-percent study abroad rate, and cross-border research opportunities), and rigorous academics (a top producer of Fulbright Scholars among liberal arts colleges). The school’s facilities reflect this dedication: the campus is home to a rooftop observatory, a greenhouse, labs for robotics and virtual reality processing, two concert halls, a sculpture garden, three libraries, an art museum and a colonial chapel. Extracurricular offerings include free music lessons (through a gift by an alumnus), 28 varsity athletic teams, and the annual Camelympics(a two-day inter-residence physical and intellectual competition named for the school’s mascot, the camel).

College of Charleston, Charleston, SC
Society dictates that you’re not supposed to wear white to a wedding, or after Labor Day, but come May, graduates from the College of Charleston find it suits them just fine. One of the few schools in the country to abandon the traditional cap and gown, seniors at Charleston take a more formal approach to their attire: women wear white dresses, and men wear white dinner jackets (their winter counterparts, the December graduates, wear black tuxedos and black dresses at their ceremony). In addition, in a tradition dating back at least eight decades, the women carry a bouquet of six red roses while the men affix a boutonniere with a singular red rose to their lapel. The school, which awards almost 2,300 degrees each May, has come a long way since the initial graduating class of six students took the stage in 1794.

A mid-sized public school with a private university feel, the College of Charleston provides a nationally recognized liberal arts education in a beautiful and historic Southeast setting. Students at Charleston have easy access to beaches, trails and a thriving downtown scene where the Spoleto Festival arts event, Charleston Wine + Food Festival, and Charleston Fashion Week are held each year. The school’s 12,000 students can pursue 47 majors, 71 minors, and 19 advanced degree programs on a campus that played a key-role in both the American Revolution and the American Civil War. CofC is also noted for its extensive extra-curricular programming. The NCAA Division I Cougars field 20 Varsity sports teams and have produced such notable alumni as the Major League Baseball’s Brett Gardner and the National Basketball Association’s Anthony Johnson. The campus is also home to its own student-run Emergency Medical Services organization, which in cooperation with the Charleston County EMS provides first responder services to the college community. The school’s 120 clubs and organizations ensure something for everyone from Greek Life and Vegan Club to Quidditch and Water Sports. No wonder Newsweek named College of Charleston one of the country’s most interesting schools.

Williams College, Williamstown, MA
Think twice about wearing that watch your parents gave you for graduation to the festivities! Since 1916, Williams College graduates have gathered prior to the ceremony and watched with bated breath as a watch is dropped. The graduating class’s president and vice-president send the watch on its 80-foot free fall from the spire of Thompson Memorial Chapel. Legend has it that if the watch breaks, time symbolically stops, and the class will have good luck. Past class presidents have admitted to toying with fate by buying a cheap watch to ensure its malfunction. The chosen timepiece also often reflects the class’s personality; one recent class used a Mickey Mouse pocket watch!

At the foot of Mount Greylock in Massachusetts’ Berkshire Mountains, Williams is a respected, private liberal arts institution. In addition to their time-ly superstition, the school has pioneered many other unique student activities. Mountain Day, held on a spontaneous Friday each October, is announced with ringing bells signaling the canceling of classes (following which, all 2,100 students hike up into the mountains to picnic, bond, and enjoy nature). At the end of each semester, the college-owned, student-run radio station, WCFM, hosts an all-night trivia contest in which students, friends, alumni and professors all compete. But Williams is serious about academics too. The school’s academic offerings are divided into three divisions: humanities, sciences, and social sciences, with 25 departments and 36 majors. One of the distinctive marks of a Wiliiams education is its Tutorial Program. Modeled after systems in place at UK universities including Oxford and Cambridge, the 60+ tutorial course offerings give students significant responsibility in terms of their intellectual development and participation. Professors supervise pairs of students, capped at ten per tutorial, as they alternately produce and critique work on a selected subject. Outside of class, students can spend their time on the field (half of students play on one of the school’s 32 intercollegiate athletic teams) or visiting one of the campus’ many museums dedicated to subjects from art to astronomy.

Colleges and universities throughout the country have put a unique spin on graduation. Superstitions, competitions, and distinctive traditions are important to consider when researching a school, as they can reflect the spirit of the campus community. The years spent at college may be some of the most exciting and unforgettable in your life. Focus on finding a great social and academic fit for you and there’s no doubt that when it’s your turn to graduate from college, it will be an occasion to remember!