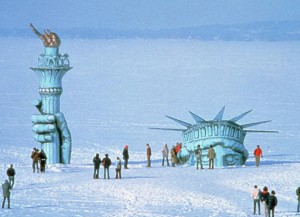 In the US and in many countries around the world, this month kicked off with April Fools Day on April 1st. For students who enjoy a good laugh, there are many colleges with students who like to get in on the fun. In the spirit of jokes, shenanigans, and hoaxes, the counselors at IvyWise have identified five schools that are home to legendary pranks. If you’re looking for a school where you can exercise your brain – and your funny bone – consider these five schools as you start your college search:

Massachusetts Institute of Technology, Cambridge, MA
Known for its science and technology programs, Massachusetts Institute of Technology (MIT) in Cambridge, MA has a long history of “hacking,” but it’s not what you think! At MIT, “a hack” doesn’t refer to breaking into a computer network, but rather to the creative practical jokes carried out by students, alumni, and even faculty at this private university. True to the school’s strengths, the jokes often involve feats of mathematics and engineering. This year, students created a giant, playable version of the game Tetris on the side of the school’s Green Building. Previously, students have created a giant Scrabble board on the side of a building and suspended a banner reading “Go Sox” (a nod to Boston’s baseball team) between two buildings spanning more than 1,000 feet. But perhaps the school’s most infamous hack took place in 1994, when students woke to find a campus police car with flashing lights, a parking violation which read “no parking for this location,” and a cruiser number, pi, atop the Great Dome at the center of campus.

With 77 Nobel Laureates, 52 National Medal of Science winners, and 38 MacArthur Fellows in the MIT community, it is no surprise that MIT has been the site of some of the most clever college pranks. The school’s website even features a timeline and comprehensive “hack gallery.” In addition to providing a good laugh (the school is also home to two comedy groups: Roadkill Buffet and Stand Up Comedy Club), the school offers 32 majors and 48 minors to its 4,384 undergraduate students. The school also takes a unique approach to winter break with its Independent Activities Period. During this time between Fall and Spring Semesters, students can pursue hundreds of optional activities. Activities include the MIT Mystery Hunt, one of the oldest and most complex puzzle competitions in the world, and 6.270, a Lego robotics competition.

Rice University, Houston, TX
A private research university, Rice University encourages students to put the school’s motto, “unconventional wisdom,” into action. Unconventional wisdom was certainly put to use in 1988 when, after 58 years of the school’s statue of William Marsh Rice facing the same direction, students decided it was time for a change. In an interdisciplinary effort (involving the participation of electrical engineering, biochemistry, and English majors, among others), a group of students rotated the 2,000-pound statue 180 degrees. Though the school eventually restored the statue to its original position, the skills required to carry out this prank were universally admired. Students had employed computer models, conducted a test run (which involved rotating a car), and used code names from the X-Men comic book series. Moreover, while it took the students one hour and $400 to rotate the statue, it took professional movers three hours and more than $1,500 to restore the statue to its original position.

While the stunt may have been a one-time feat, laughter at Rice persists thanks to student comedy groups Spontaneous Combustion (SpoCo) and Kinda Sketchy, just two of the school’s 230 student organizations. Further, Rice offers its 3,708 undergraduate students more than 50 majors bolstered by an intimate 6:1 undergraduate student-faculty ratio. Rice also fosters community through its residential college system. All freshmen are randomly assigned to one of 11 colleges, in which students live, dine, study and participate in social, cultural, and athletic activities. Located in Houston, Texas, social, cultural, and athletic activities abound off-campus as well, including access to the city’s Theater District, Museum District, three professional sports teams, and the annual Livestock Show and Rodeo.

Louisiana Tech University, Ruston, LA
To students at Louisiana Tech University, the Centennial Plaza clock tower in the heart of campus (which chimes on the hour) represents comfort and security – at least most of the time. Several years ago a group of students re-programmed the clock to play “Dueling Banjos” every hour, rather than its normal ring. This goose bump-provoking tune, featured in an iconic scene in the thriller film Deliverance, gave many students the jitters. The new tune continued for several hours as it had been digitally programmed and took university officials some time to locate the source and reinstall the original sound.

Located in the small college town of Ruston in northern Louisiana, Louisiana Tech is a large, public university whose 9,000 undergraduate students hail from 47 states and 64 countries. Students can choose from more than 80 programs of study (from Cyber Engineering to Wildlife Habitat Management) and 130 student organizations (from the Flight Team to the Paintball Association). The school is also home to the NCAA Division I Bulldogs/ Lady Techsters who compete in 16 varsity sports. Off campus, students can enjoy the southern charm of Ruston, which is home to boating and tubing attractions, extensive bike trails, and some of the nation’s sweetest peaches!

University of Wisconsin – Madison, Madison, WI
In the winter of 1979, students at the University of Wisconsin in Madison, WI couldn’t believe what they saw – the Statue of Liberty emerging out of their very own Lake Mendota! Making good on a campaign promise, the student government’s Pail & Shovel Party had brought the New York landmark to Wisconsin, or so it seemed. The group had built a life-size replica of the statue’s crown and torch using chicken wire and paper mache (at a cost of $4,500, which today would be more than $14,000), and placed it atop the frozen surface so it appeared to be submerged in the 83-foot-deep lake. Later that year, the party took their jest outside, where they planted more than 1,000 plastic, pink flamingoes on the campus’ front lawn. In honor of the famous prank, in 2009, Madison named the plastic pink flamingo its official city bird!

Aside from Lady Liberty, this public research university is home to several National Historic Landmarks, including North Hall, Science Hall, and Red Gym (originally an armory). The school is also home to nearly 30,000 undergraduate students who can choose from 157 majors, more than 4,000 courses, and 800 student organizations (including Understudies Improv, Humorology, Inc., a musical comedy group, and The Madison Misnomer, a comedic newspaper). Further, students can venture down to State Street to check out the Madison Comedy Club, where they can also pursue performance and internship opportunities. A testament to the school’s sense of humor, UWM alums include Rich Dahm (co-executive producer and head writer of The Colbert Report) and actress Jane Kaczmarek (Malcolm in the Middle).

Cornell University, Ithaca, NY
In 1997, a mischievous student at Cornell University placed a hollowed-out pumpkin atop the university’s 174-foot tall McGraw Tower. To the awe of the campus community, the pumpkin withstood the frigid Ithaca winter atop the spire. As interest grew, a member of the Academic Technology Services office even set up a webcam to broadcast live images of the pumpkin 24 hours a day. With no signs of decay, the following year a crane was set up for the university provost to ceremoniously remove the pumpkin. However, a work crew testing the crane accidentally knocked the pumpkin and it finally tumbled down. The pumpkin miraculously remained intact despite the 10-story fall. Confounded, John Kingsbury, a professor emeritus of plant biology, gathered a team to determine if in fact the mysterious object really was a pumpkin. After much scientific debate, they arrived at this conclusion: “Due to the carefully selected composition of this panel, the microscopic details and the gross morphology can be merged into a body of evidence that leads to a single, harmonious conclusion: It is a pumpkin!”

This collaborative spirit of learning can be seen throughout the Cornell campus community. The school, both a private university and a federal land-granted institution, is committed to finding ways to improve life for New Yorkers (most recently evidenced by the school’s plans to restore and inhabit New York City’s Roosevelt Island). At its home campus upstate, the university offers more than 4,000 courses in 100 majors and interdisciplinary programs to its nearly 14,000 undergraduate students. Further the school offers more than 500 student organizations including comedy groups Humor Us!, The Skits-o-phrenics, and the Whistling Shrimp, and humor magazines Big Red Rag and Lunatic.

While college is about getting a higher education, hopefully, you’ll also have some fun! When researching a school, in addition to looking at courses, professors, and academic opportunities, also look at traditions and fun facts that will help you get a feel for the campus community. Thoroughly researching and identifying the schools that are a good fit for you is an important step in achieving your academic and personal goals, and will ensure you have the last laugh when it comes to your future plans!