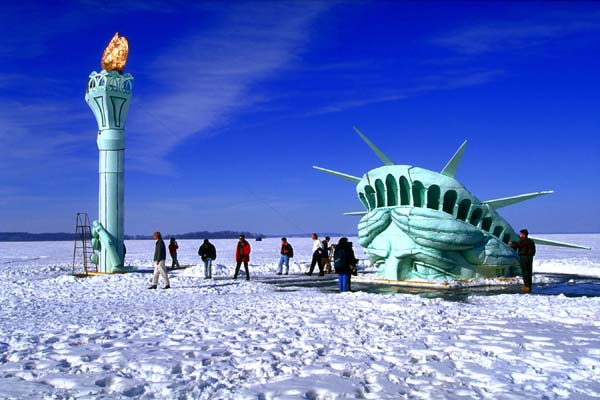 College students have conducted some of the best pranks in history. Rival schools, politicians, school administrations, and fellow students have all fell victim to elaborate and harmless pranks. A lot of technical planning, crafting, and attention to detail was put in to these projects so they would go off without a hitch.

In honor of April Fools’ Day, here are some of the best college pranks in history!

The 1961 Rose Bowl was played between the University of Washington Huskies and the University of Minnesota Golden Gophers, but Cal Tech stole the show. A group of students, now known as the “Fiendish Fourteen” pulled off one of the largest and most meticulous pranks in college and sports history.

Caltech’s campus is only a few miles away from the Rose Bowl stadium, so this group of pranksters decided to celebrate their university by replacing instructions and cards to be used in the halftime show. At halftime on game day, when the Huskies’ cheerleaders led fans in turning around giant cards meant to spell out “Huskies,” they instead flipped around cards that spelled “Cal Tech” in big, bold letters. The stadium fell silent, before a roar of laughter could be heard.

In the spring of 1978, the “Pail and Shovel” party was elected to lead the student council at the University of Wisconsin. Party leaders Jim Mallon and Leon Varjian led a campaign with promises including turning the entire budget into pennies so that students could dig through it with pails and shovels (hence their name), and having all the clocks on campus run backwards so classes would end before they were able to begin. When election time rolled around, the school saw the highest turnout to date, and the Pail and Shovel party took over almost every government seat.

While in power, Mallon and Varjian implemented some important student government initiatives such as campus-wide toga parties. But they vowed to fulfill one of their original campaign promises: to move the Statue of Liberty to Lake Mendota. One morning in February of 1979, a giant replica of the top of Lady Liberty appeared in a frozen Lake Mendota. While the Pail and Bucket party insisted a helicopter had flown it in when cables snapped plunging the statue into the lake, it was really made of chicken wire and paper mache and was built by Pail and Bucket party members. This creative, and time consuming, prank goes down in history as one of the best, and elaborate, of all time.

Cornell students Edward T. Horn III and Lester Blumner conducted this prank in 1930. With a Cornell Daily Sun banquet coming up, and a professor who believed a political hoax like one that had occurred in France could not happen in the states, these two students had some motivation. They invented a prominent Republican politician called Hugo N. Frye (sounds like “You Go and Fry”) and proceeded to invite the country’s most famous Republican leaders to a banquet honoring this non-existent party member. While none of the invitees bit at the invitation, many sent notes commemorating the great leader and honoring his many virtues. The responses were later read at the Cornell Daily Sun banquet aloud, much to everyone’s entertainment.

Perhaps the most well-known prank victim was Vice President as the time, Charles Curtis. When the New York Times ran a story about the prank, and included the VP in the piece, Curtis apparently found it to be quite humorous. While Horn and Blumner were forced to resign from the student paper and issue statements of apology to avoid being expelled, their prank goes down in Cornell, college, and political history.

Pranksters at MIT, or “hackers” as they’re known at the school, have administered some elaborate pranks around the school over the years. Undergraduate students have a rich history of pranking to demonstrate creativity, mindful execution, and wit. Amongst other campus landmarks, the Great Dome at MIT is a popular target.

The University of Chicago annual scavenger hunt is one of the largest, most creative, and elaborate in the world. Tasks have included “break a world record. Provide proof, including the old record,” and “the package, the postage, the person, and the proof that the person was mailed in the package with the postage.” Students get creative when completing the higher-point valued tasks, and two students in particular went above and beyond in 1999.

When a scavenger hunt item was “a breed reactor built in a shed,” in honor of the boy scout who built a breeder nuclear reactor in the shed next to his home, UChicago physics majors Justin Kasper and Fred Niell did just that. Using scrap aluminum, carbon sheets, and Thorium powder from the inside of vacuum tubes, the students built a reactor which they stopped before it could do any damage. A physics professor inspected the reactor to confirm its legitimacy, and the students were awarded points for the item. Unfortunately, the accomplishment still only put them in second place in the end.

These students used their wits, creativity, resources, and campuses to pull off some pretty incredible pranks. All were safe (though the nuclear reactor is questionable) and will live in college history as some of the best pranks of all time. So use your intelligence and pranking abilities for laughter and fun, and have a happy April Fools’ Day!