The Value of a Liberal Arts Education in Today’s World 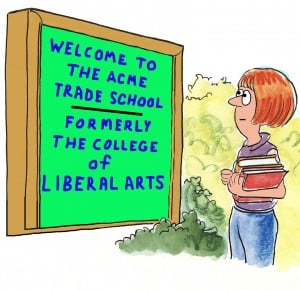 The growing cost of college combined with the increasing demand for students in career-ready fields such as engineering, finance, computer science, and medicine has left many people challenging the liberal arts. Much of the conversation surrounding higher education is focused on value and ROI. What majors earn the most right out of college? Which institutions produce graduates with the highest salaries? So as you approach your college search you may find yourself asking: Is a liberal arts education still relevant in the 21st Century?

In short: yes. In our rapidly changing global economy, with millennials averaging five to seven career changes in a lifetime, one could argue that a liberal arts education may be more valuable than ever before. In fact, a recent study by the Association of American Colleges and Universities found that nearly three-fourths of employers nationwide would advise students to pursue a well-rounded liberal arts education.

Why consider a liberal arts education?
A liberal arts education is intended to expand the capacity of the mind to think critically and analyze information effectively. It develops and strengthens the brain to think within and across all disciplines so that it may serve the individual over a lifetime. Students choose a specific major when they attend a liberal arts college, but they are also required to take courses in a variety of disciplines, where there is a heavy focus on writing and communicating effectively.

Liberal arts colleges also tend to be smaller institutions that focus on undergraduates and teaching. The hallmarks of liberal arts colleges, such as Bowdoin, Williams, and Amherst, are small class sizes, close access to professors and undergraduate research opportunities, and a broad-based academic program in in the core subject areas of mathematics, the social sciences, and the hard sciences.

Art History Professor T. Kitao of Swarthmore delivered an address with a poignant summary of the value of a liberal education:

“The knowledge you learn about the subject of the course is its nominal benefit. It is like the stated moral at the end of a fable. The real substance of learning is something more subtle and complex and profound, which cannot be easily summarized – like the story itself. It has to be experienced, and it is as an experience that it becomes an integral part of the person. Learning how to learn by learning how to think makes a well-educated person.”

A liberal arts degree is not “useless” in the 21st century job market.
In our increasingly evolving, globalized world, liberal arts colleges produce critical thinkers who have the confidence and flexibility to continually learn new skills and material. In his book, The World Is Flat: A Brief History of the Twenty-First Century, Thomas Friedman states that “in an age when parts or all of many jobs are constantly going to be exposed to digitization, automation, and outsourcing…it is not only what you know but how you learn that will set you apart. Because what you know today will be out-of-date sooner than you think.”

Even if you are certain about a career path you want to pursue, a liberal arts background can help you make it to the top of your field. For example, a student who is certain she wants to be a doctor could attend a liberal arts college pursuing a major in psychology and minor in economics before attending medical school. As a doctor, she could call upon her psychology degree to better understand and relate to her patients. The strong writing skills gained from her liberal arts background would help her to effectively communicate her research findings through publications. Her economics minor would help her to be successful if she decided to start and grow her own private practice.

It’s also important to note that while many families are concerned with immediate ROI and degrees that command high starting salaries right out of college, AAC&U’s “How Liberal Arts and Sciences Majors Fare in Employment” report found that by their 50s, liberal arts majors on average earn more annually than those who majored as undergraduates in professional or pre-professional fields. While STEM majors tend to earn the highest salaries out of college and typically earn more overall, liberal arts degree holders are seeing a great ROI – it’s just not as immediate.

Steve Jobs once said, “Technology alone is not enough. It’s technology married with the liberal arts, married with the humanities, that yields us the results that make our hearts sing.” It’s important to remember that, while there is a demand for STEM students and specialized degrees, it is possible to pursue a liberal arts education with intent and create multiple paths to career success in the process.