The Case for Reviving the Humanities 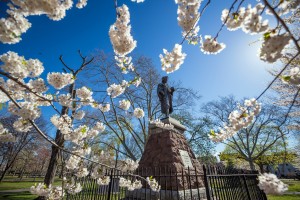 “Where art thou, would-be humanists?”

Once upon a time, it was cool to study history and literature, but this fall, some of the most in-demand college classes will not be covering Shakespeare or the Cold War, or even supply and demand, but rather the language du jour, that of zeroes and ones.

Last year, for example, over 500 (or nearly one in 10) undergraduates filled CPSC 100, a.k.a. Introduction to Computing and Programming, at Yale, and CS50, the Harvard version, enrolled nearly 900 students.

Indeed, in just the last five years, the number of computer science degrees more than doubled at Harvard and more than quadrupled at Yale. Overall, at these two colleges, the share of physical or applied sciences and engineering degrees conferred increased by 91% and 60%, respectively. Meanwhile, enrollment in the humanities continued to decline. Between 2011 and 2015, the share of arts and humanities degrees dropped by at least 20% at Harvard and Yale, and they are not alone in their experience.

Declines By the Numbers

According to the latest analysis by the American Academy of Arts and Science, nationwide, the biggest gainer in the last decade has been the natural sciences; all the other fields either declined or leveled. In 2014, the share of humanities bachelor’s degrees, which had been declining since 1990, hit a historic low of 6.1%. (Indiana Jones fans would be disappointed to learn that, within the humanities, archeology and classics studies suffered the most; History and English took hard hits, too.) That said, historically, the biggest fall in the humanities was between 1969, the peak year, and 1985, when the share plummeted from 17.2% to 6.4% of all bachelor’s degrees. One explanation points to the changing gender patterns in higher education, as more women entered college post-WWII and left the humanities. So, relatively speaking, the recent trend is more of “dip,” but a real one, nonetheless.

Why are the Humanities Declining Now?

Several macro-level explanations have been posited and debated. Some argue that federal government funding favors science, or that the humanists themselves have abandoned the endeavor. Others attribute to shifted expectation, especially since the Great Recession, of college from a place where students pursue learning for learning’s sake to job training. Still others cite revised curriculum requirements that limit students’ exposure to the humanities and admissions preferences favoring prospective science students.

In response to the recent decline, many colleges are actively recruiting future humanists or hybrid versions. For example, at Stanford, only 10-18% of its applicants specify a primary interest in the humanities, but 43- 45% of the faculty in the School of Humanities and Sciences are dedicated to these disciplines; the school has initiated summer humanities programs to draw high school students, redesigned undergraduate introductory courses, and integrated computer science and the humanities in CS+X joint majors.

So Why Value the Humanities?
Scholars and commentators have proffered a gamut of reasons (just Google “why humanities,” and, to be fair, critics have their counterpoints, too). The Commission on the Humanities and Social Sciences believes that by “[e]mphasizing critical perspective and imaginative response, the humanities…foster creativity, appreciation of our commonalities and our differences, and knowledge of all kinds.” They “remind us where we have been and help us envision where we are going.” To value the humanities is not to elevate them above the other fields, but to ensure a multifaceted and holistic education.

Furthermore, “there are real, tangible benefits to the humanistic disciplines,” argues Brown University President, Christina Paxson. “In the complex, globalized world that we are moving toward,” she writes, “it will obviously benefit American undergraduates to know something of other civilizations, past and present.” And as science and technology continue to advance, the humanities also help us “remain grounded in our core values… We need humanists to help us understand and respond to the social and ethical dimensions of technological change.”

The humanities provide professional advantages, too. For example, a recent study of 300 executives found that the number one learning outcome employers feel colleges should improve on is the “ability to effectively communicate orally and in writing” (89%). Other outcomes highly desired by employers include critical thinking and analytical reasoning (81%), ethnical decision-making (75%), and innovation and creativity (70%). Emerging research also suggests that any first-job salary gaps for liberal arts majors are short-term and such an education, relative to non-liberal arts degrees, is linked to increased likelihood of being a leader and seen as ethical, valuing the arts and culture, and leading a happier life.

Meet IvyWise college admissions counselor Christine! Christine gives us some great insight on the importance of creating a school list that best fits your goals and aspirations. Follow us to learn more from our IvyWise counselor video series!