Stars In and Out of the Classroom 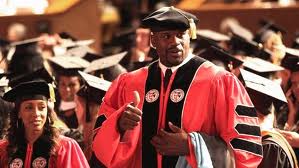 What do Ashley Judd, Art Garfunkel, and Bill Cosby have in common? They all have master’s degrees! Many award-winning actors, performers, radio personalities, and athletes have once walked across the stage to receive a diploma, from bachelor’s degrees to PhDs, and while many stars studied what would eventually become their fame-making careers, others hold degrees that may surprise fans.

Whether they obtained their degree (or degrees) immediately following high school, or squeezed in studying between movie takes, concerts, or all-star games, many stars have worked hard to pursue their academic and professional interests beyond their undergraduate degrees.

Here is a list of some celebrities who have gone above and beyond in academics!

Life as a professional athlete leaves little time to attend classes, but these jocks have used their physical and mental endurance to achieve some impressive degrees.

Over a decade after graduating from Louisiana State University, and amidst his sensational career, Shaquille O’Neal headed online to obtain his MBA from the University of Phoenix, and then earned his doctorate degree from Barry University.

Similarly, WNBA star Lisa Leslie graduated with an MBA from the University of Phoenix years after her undergraduate career at University of Southern California.

Meanwhile, Ultimate Fighting Champion Terry Martin brings his smarts to every match. Martin has a master’s degree in clinical psychology from Concordia University in Chicago, and is currently working toward his doctorate from the Adler School of Professional Psychology.

The School of Rock

These musicians may rock hard, but they study even harder.

Queen songwriter and guitarist Brian May really is a champion of astrophysics. He received both his bachelor of science and PhD from Imperial College London. Today, he serves as the Chancellor of Liverpool John Moores University.

Dexter Holland of the band Offspring has a bachelor’s and master’s degrees in molecular biology from the University of Southern California. He was even a PhD candidate before he decided to pursue his musical career.

Art Garfunkel excelled in academics early on in his musical career in New York City. Garfunkel received both a BA in art history and an MA in mathematics from Columbia University.

Tom Scholz, founder of the band Boston, has certainly put his master’s degree in mechanical engineering from the Massachusetts Institute of Technology (MIT) to good use. He invented the Rockman guitar amplifier to capture the “true Boston” sound.

Some of these actors learned their stagecraft the traditional way, and others decided to pursue interests outside of the arts, but all have made a big impact on and off the big screen.

The Master of Fine Arts program at the Yale University School of Drama has trained some of the world’s biggest stars. Meryl Streep, Angela Basset, Paul Giamatti, Lance Reddick, Sigourney Weaver, and Liev Schreiber are just a few among this prestigious program’s many notable alum.

After earning a BA in English from the University of California-Los Angeles, James Franco went on to graduate with an MFA in writing from Columbia University. Now he is earning his PhD in English from Yale University, and is teaching at his alma mater, UCLA.

Ashley Judd can be seen cheering on her undergraduate alma mater, the University of Kentucky, at plenty of sporting events, but her loyalties may be divided these days. Judd earned her master’s in public administration from the John F. Kennedy School of Government at Harvard University in 2009.

The X-Files and Californication star David Duchovny also has an impressive background in academics. After receiving his BA in English literature from Princeton University, Duchovny went on to earn his MA in English Literature from Yale University, and began a PhD program at Yale before concentrating on his acting.

Former Blossom star Mayim Bialik puts her academics to excellent use in her current role as a neuroscientist on The Big Band Theory. Dr. Bialik earned a BS in neuroscience, a BA in Hebrew and Jewish studies, and a PhD in neuroscience from UCLA before returning to acting in 2010.

These Degrees Are No Joke

These guys didn’t go to college to clown around, at least not in the classroom.

Rowan Atkinson, more commonly known as “Mr. Bean”, has a master’s of sciences in electrical engineering from The Queen’s College, Oxford.

Hangover and Community funnyman Ken Jeong knows exactly how to tickle your funny bone because his is actually a licensed physician. Jeong studied zoology as an undergraduate at Duke University, before earning his MD at the University of North-Carolina-Chapel Hill. He even finished his internal medicine residency before trying his hand at comedy.

After taking a break from academics to pursue comedy, Bill Cosby was awarded a special bachelor’s degree from Temple University. Cosby did not stop there; he immediately went on to earn his master’s degree and doctorate in education at the University of Massachusetts Amherst.