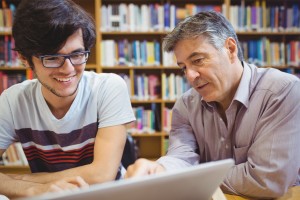 College is where great minds are molded – you never know if you’re sitting next to the next Nobel Prize-winner, global celebrity, or even President of the United States. While you’re likely to share some classes with innovators who will go on to do great things (yourself included!), often times the most famous and influential people you share a course with are the professors themselves!

Many colleges employ distinct faculty members, from the academically accomplished to those who might have a paparazzo drop in. Celebrity professors are at almost every school, even if it’s not obvious at first.

There are great minds out there just waiting to teach students a thing or two – so here are some colleges that have been known for hosting famous faculty, both past and present.

New York University, New York, NY
It’s no secret that the Big Apple is saturated with celebrities. From movie and pop stars, to famous authors, politicians, and philanthropists, New York City is teeming with amazing talent. So it’s no surprise that many who “do” have also elected to teach at New York University.

Some of the most notable faculty members include Spike Lee, who teaches a graduate film course, James Franco, who also briefly taught a graduate-level film class at NYU’s Tisch School of the Arts, and musician Questlove.

But it’s not just the film and music programs that attract high-caliber professors. Best-selling author Jonathan Safran Foer is a professor in the NYU Creative Writing Program, along with E.L. Doctorow, author of Ragtime, Zadie Smith, and other critically-acclaimed writers.

As one of the most famous documentary cinematographers, Nancy Schiesari is part of UT-Austin’s A-list faculty, teaching production at the university’s Moody College of Communication.

If you’re looking for a government connection, James K. Galbraith, the former executive director of the Congress Joint Economic Committee and famous author and economist, is a professor of government at UT-Austin’s Lyndon B. Johnson School of Public Affairs.

For those more interested in STEM, UT-Austin is home to Steven Weinber, a Nobel laureate in physics, and Robert Metcalfe, the co-inventor of Ethernet and founder of 3Com, which is now part of Hewlett Packard.

Stanford University, Stanford, CA
Los Angeles may be known as the home base for many celebrities, but just 350 miles north at Stanford University is where you’ll find some of the most notable and influential faculty in the country, with 22 Nobel laureates, 5 Pulitzer Prize winners, and 27 MacArthur Fellows.

One of the most famous Stanford professors is none other than former Secretary of State Condoleezza Rice. Rice teaches political science as well as graduate-level political economy, and previously served as the university’s Provost in the mid-to-late 90s.

UChicago’s Booth School of Business has an accomplished faculty, including Nobel laureates Eugene Fama, Christian Leuz, and Richard Thaler. If you’re looking for more mainstream celebrity faculty, look no further than the past professors of the law and continuing studies schools.

Some very notable former faculty include President Barack Obama, who taught at the UChicago Law School from 1992-2004, Supreme Court Justice Elena Kagan, a law professor from 1991-1997, Supreme Court Justice Antonin Scalia, who also taught law, and acclaimed film critic Roger Ebert, who was a lecturer for 37 years on film for the Graham School of Continuing Liberal and Professional Studies.

Brown University, Providence, RI
It’s no surprise that some of the most prestigious universities in the country attract some big-name instructors. Brown University has enjoyed a string a famous and influential professors over the past few years.

Chinua Achebe, famed author of Things Fall Apart, was a professor of Africana Studies from 2009 until his death in 2013. Former US Representative Patrick Kennedy was a visiting fellow at Brown from 2011-2013, delivering two lectures a year while conducting ongoing neurological research.

Other famous faculty at Brown include two-time Pulitzer-Prize winning journalist David Rhode, who taught a nonfiction writing class in 2012, and musician Wyclef Jean, who was a visiting fellow in the Department of Africana Studies for the 2010-11 academic year.

Doing your homework on the courses offered at universities and their professors is key to building a balanced college list, and ultimately writing great college essays. For help with research or narrowing down your college choices, contact us today for more information on our services and our team of expert counselors!