Sample Questions from the Redesigned SAT

College Board Releases Sample SAT Questions for the Revamped 2016 Test

Earlier today The College Board released sample questions for the new SAT, which will be administered in 2016.

The announcement of the redesigned SAT came earlier this spring, and included major changes, like no more required essay and the elimination of the penalty for wrong answers. The College Board also said that major changes would come to the content of the test itself, including getting rid of crazy SAT vocabulary words, providing more evidence-based reading, and aligning math more with the Common Core curriculum.

These announcements left many wondering what the new test and its content would look like and what this means for test prep going forward. Now, we have a better idea with some of the new sample questions. The College Board stressed, however, that these sample questions are just that: samples. As more research and pretesting is conducted, these questions are expected to evolve.

The College Board released sample questions for each of the new focus areas in the reading and writing, math, and essay sections:

Below are some of the sample questions:

Working with linear functions to model phenomena has high relevance for postsecondary study and is a core aspect of a rigorous high school curriculum. Understanding that the pressure increases 2.2 pounds per square inch every 5 feet deeper the scientist dives, and being able to cast this fact into the language of algebra, will steer students to the correct answer.

If (x,y) is a solution to the system of equations above, what is the value of x2?

In this question, students are asked to analyze a system of nonlinear equations, making use of structure where appropriate.

“[. . .] The coming decades will likely see more intense clustering of jobs, innovation, and productivity in a smaller number of bigger cities and city-regions. Some regions could end up bloated beyond the capacity of their infrastructure, while others struggle, their promise stymied by inadequate human or other resources.”

As used in line 55, “intense” most nearly means 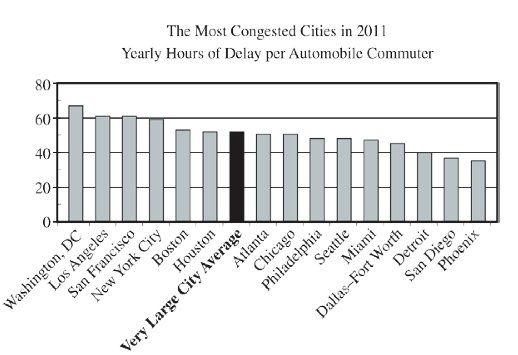 Which claim about traffic congestion is supported by the graph?

B) Los Angeles commuters are delayed more hours annually by traffic congestion than are commuters in Washington, D.C.

C) Commuters in Washington, D.C., face greater delays annually due to traffic congestion than do commuters in New York City.

D) Commuters in Detroit spend more time delayed annually by traffic congestion than do commuters in Houston, Atlanta, and Chicago.

The best answer here is choice C, as the only one of the four claims supported by the graph is that automobile commuters in Washington, D.C., face greater delays annually than do automobile commuters in New York City. Higher bars on the graph represent longer annual commute delays than do lower bars; moreover, the number of hours of annual commute delay generally decreases as one moves from left to right on the graph.

Other changes to the SAT that were outlined in The College Board’s release:

Scoring – What’s new: Subsocring and scores within the subscore

It was previously announced that the SAT would return to its former 1600 point scale. Now the SAT score report will include:

Analyzing charts and graphs in both Reading and Math sections

Essay is now optional and analyzes a source text

What do you think of these sample questions? How do you think you would do on the new SAT? Take Washington Post’s interactive quiz using the new sample problems to find out!