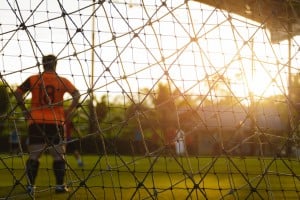 With the start of the new school year comes an entirely new season of college sports! As one of the most prevalent and exciting parts of the college experience, athletic events bring the campus community together, and often serve as the catalyst for many college traditions.

Cheers, chants, and pre-game rituals are customary at many colleges, but these schools have taken it to the next level with some fun, interesting, and unusual sports rituals.

Harvard University, Cambridge, MA
The Little Red Flag
Carried by Harvard University’s “most loyal fan” to every Harvard vs. Yale football game, the Little Red Flag is one of Harvard’s oldest sports traditions. It started with Fredrick Plummer, known around Cambridge as the man who attended 59 Harvard vs. Yale football games prior to his death in 1949. He always carried a little red flag with an “H” on it to the games, believing it to be good luck for Harvard.

Following Plummer’s death, the “little red flag” was found among his possessions, and it was suggested by the editor of the Harvard Alumni Bulletin that it should be given as an honor to Harvard’s most loyal fan. It was passed down on Commencement Day in 1951, and is brought to every Harvard-Yale game, in hopes of a victory for the Crimson.

What started as an end to a celebratory march around campus in 1990, the Mirror Lake Jump has turned into one of the most popular college sports traditions, with thousands of students participating each year. While the Mirror Lake Jump is not an official university-sanctioned event, OSU has taken precautions to preserve the tradition and ensure the safety of students as the crowd grows each year.

From the first tip-off to the final buzzer of every single game, both home and away, you will see the mascot in constant motion. For his or her efforts, the student brave enough to don the costume and perpetually flap its wings receives a full scholarship. What’s more, they join and elite club known as “the Featherhood,” and remain a part of St. Joseph’s Basketball history.

Taylor University, Upland, IN
Silent Night
At most colleges and universities, the Friday before finals week in the Fall Term is a night of stress and late-night studying. This is not the case at Taylor University. Instead, students head to a basketball game – the beginning of which is probably quieter than the libraries.

This game, referred to as “Silent Night,” began in 1997 with students attending the game in their pajamas. Until the 10th point of the game is scored, the crowd does not make a sound, and after that 10th point is scored,the crowd goes crazy.

The game concludes with everyone joining together to sing “Silent Night,” followed by a campus-wide Christmas party.

After the UNH team scores its first goal, a fish is thrown onto the ice and the crowd goes wild, symbolizing that the opposing team must now “fish” the puck out of the back of the net. The tradition initially began in the ‘70s and has been honored ever since – even in the face of penalties. The tradition is so embedded in UNH’s hockey fandom, that the designated fish-thrower (a member of the Zeta Chi fraternity) doesn’t even have to buy it – the fish is donated by a local fish market!

Looking for a campus culture rich in athletic traditions? Our team of expert counselors can help you identify and apply to the schools that are best fit for you – academically, culturally, socially, and financially. Contact us today for more information!