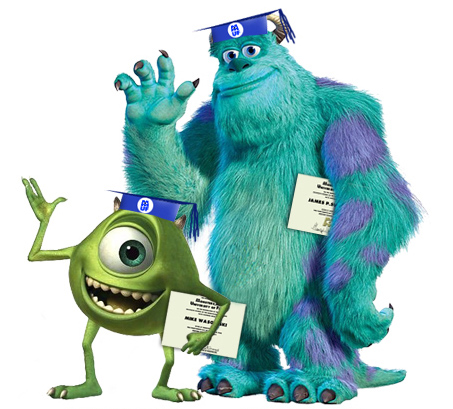 In recent years, animated films such as The Fantastic Mr. Fox, Toy Story 3, and Despicable Me have been met with widespread enthusiasm and unprecedented box-office success. In fact, Toy Story 3 was Disney’s most successful release ever and the fifth most profitable motion picture of all time! This year’s abundance of animated releases, including Rio, Cars 2, and The Smurfs, among several others, along with innovations in CGI and 3D, indicate that neither the industry, nor the technology are letting up anytime soon. Animation has become increasingly available as a course of study at colleges throughout the US, offering students a combination of artistic and technical disciplines. With widespread relevance from TV and film to computer programs, video games, and even architecture, medicine, and engineering, if you are considering a major in animation, the expert counselors at IvyWise have drawn up some schools to consider adding to your college list.

Carnegie Mellon University, Pittsburgh, PA
If you’ve ever imagined stepping inside the mind of Mickey Mouse, or advancing 3D education with programming software like Alice, you might want to consider Carnegie Mellon University. The university’s School of Design offers Communication Design and Industrial Design programs, and students have the option to pursue an interdisciplinary program by combining a curriculum in the College of Fine Arts with humanities, sciences, or computer science studies. Many students in design programs take part in Building Virtual Worlds, (a course founded by Randy Pausch, co-author of New York Time’s bestseller The Last Lecture), through the Entertainment Technology Center. Students in this class have access to programming software developed by Walt Disney Imagineering’s Virtual Reality Studio to create and share virtual experiences. Previous projects have included a virtual 3D snowball fight and an interactive story about candy bars that fall in love. If you’re already thinking about life after graduation, companies such as EA Video Games and Activision have pledged to hire future CMU graduates. Plus, Disney has chosen Carnegie Mellon to develop animation, robotics, and other digital technologies in an attempt to make Mickey and the Disney experience more interactive.

Founded in 1900, Carnegie Mellon is a private research institution spanning 140-acres in Pittsburgh, Pennsylvania. Carnegie Mellon has just over 6,000 undergraduates and an intimate student-faculty ratio of ten to one. Students have ample opportunity to explore their interests both inside and outside the classroom; the school offers over 90 majors and minors, more than 225 student organizations, and a branch campus in Qatar. With easy access to downtown Pittsburgh, students can also frequent the numerous art and cultural centers nearby; the city is home to the Pittsburgh Symphony Orchestra, the Pittsburgh Ballet Theatre, the Carnegie Museum of Art, the Pittsburgh Zoo, PPG Aquarium, and PNC Park (home of Pittsburgh’s Major League Baseball Team, the Pirates).

California Institute of the Arts, Valencia, CA
Hoping to showcase your work at a nationally acclaimed film screening? Each year, the California Institute of the Arts (CalArts) hosts the Bijou Festival, an event for students to present their creative work to members of the campus community, as well as to producers and other film professionals. CalArts was founded by Walt Disney in the 1960s and the school was the first degree-granting institution in the country dedicated specifically to the visual and performing arts. Through programs such as Character Animation, Experimental Animation, Film and Video, and Art and Technology, students take hands-on courses in drawing, design, storytelling, character development, and 3D work. In addition to fulfilling general course requirements, students at CalArts are also required to attend lectures, critiques, demonstrations, and screenings to learn about and draw from the experiences of renowned animators and filmmakers.

Situated in Valencia, California, a suburb of Los Angeles, CalArts is a private institution with just 888 undergraduates. Students benefit from personalized relationships with professors, evidenced by an impressive student-faculty ratio of seven to one. The school encourages its faculty to provide a rewarding and enriching educational experience with the goal of balancing practical training and aesthetic consideration. Students have access to studios, animation labs, performance spaces, and other world-class facilities, including the Walt Disney Modular Theater (one of only five modular theaters in the world), which means it can be reconfigured for each performance. Recently, the school opened a 3,200-square-foot music pavilion. This combined indoor and outdoor structure, called the Wild Beast, will also house additional classroom space. When not in class or pursuing one of the school’s hands-on extracurricular ventures, students can explore the city of Los Angeles, where they can intern at one of the many movie or television studios, find character inspiration at Disneyland, or people-watch at Venice Beach.

Ringling College of Art and Design, Sarasota, FL
Ringling College defines its typical student as an artist, animator, actor, storyteller, modeler, lighting director, set designer, costumer, sound designer, and film director. Popular majors include Computer Animation, Digital Filmmaking, Game Art and Design, Motion Design, Graphic and Interactive Communication, and Illustration. Ringling’s Computer Animation program is among the most highly regarded curriculums of its kind in the world, and has been recognized by top industry publications. The first two years of the program include courses such as 3D Design, Drawing, Concept Development, and History of Animation; during the latter two years, students move onto advanced coursework including Animation Pre-Production and the preparation of a senior portfolio. Outside of the classroom, burgeoning animators can also join one of the school’s related interest groups, including the Anime Club or the Stop Motion Club. Recently, the Academy of Motion Pictures and Sciences recognized Ringling student Bevin Carnes with a Student Academy Award for her animated film, A Leg Up.

A private institution occupying 35 acres on the Gulf Coast in Sarasota, Florida, Ringling College was funded by John Ringling of Ringling Brothers circus fame with the hope [that] a famous school of artists [would] rise, for though life is short, art is long.” The school offers a strong liberal arts curriculum in addition to its studio programs, and its small student population of about 1,300 has access to some of the most comprehensive studio and technology resources at any campus in the country. For example, Ringling provides every student with a free MacBook Pro for use during the duration of enrollment. The College is home to the Selby Gallery, a 3,000-square-foot contemporary art exhibition space, as well as eight other on-campus galleries that feature the work of students and alumni alongside those of internationally recognized artists. Frequent recruiters of Ringling graduates include DreamWorks, Universal Studios, and Warner Brothers. Beyond the school community, students can explore the town of Sarasota, which is home to the Sarasota Jungle Gardens, the Ringling Center for the Cultural Arts, and a number of beautiful beaches.

University of Texas-Austin, Austin, TX
A grimace, a smirk, an eye-roll: these expressions are easily made by humans, but how do they translate when creating animated characters? Each week, UT-Austin’s Department of Art and Art History offers two seminars, with topics ranging from the importance of facial animation in film production to the potential of virtual reality. The department also offers programs and courses in Analog and Digital Animation, Commercial Art, and Gaming Design. Professors emphasize a variety of topics in their courses that are useful to aspiring animators, including psychology, anthropology, and literary, film and design criticism. The Transmedia sub-concentration gives students access to advanced production and post-production facilities, including cameras, sound-recording, lighting, and editing equipment, an animation workstation, and a green-screen performance studio. Students who want to explore the art of animation further, can intern at local studio Powerhouse Animation and watch (or submit!) an animated short in conjunction with the Austin Film Festival.

A public research institution in the vibrant city of Austin, Texas, UT-Austin is among the most highly regarded national universities in the US. It is also among the largest–fifth-largest to be exact–with a total student body of 51,000 composed of students from all 50 states and more than 110 countries. UT-Austin students can choose from more than 300 degree-programs in 15 colleges and the school also offers more than 900 student organizations, from Texas Quidditch to the Gigglepants Improv Comedy Troupe. The school’s athletes, the Texas Longhorns, are a member of the NCAA Division I and the Big 12 Conference, and 90 percent of students participate in sports at either the club, intramural, or varsity level. In addition to the vast number of courses and activities offered on campus, students can explore the bustling city of Austin, which is known for its music and nightlife and is home to the annual Austin City Limits Music Festival and South by Southwest film and music festival.

Pratt Institute in Brooklyn, New York (with outposts in Manhattan and Utica), is a private institution, educating students in art, architecture, and design. Among the school’s alumni are William Van Alen, the architect of the Chrysler Building; Abraham Nathanson, the developer of the game Bananagrams; and David Silverman, an animator and director for The Simpsons. The school offers degrees in Architecture, Liberal Arts and Sciences, Art and Design, and Information and Library Science to its undergraduate population of 3,000 students. Students can also participate in on-campus events, such as Bring Your Own Pixel, a digital animation competition in which two to three person teams are asked to conceptualize and complete an entire animation in 24-hours. Just a subway ride from world-class museums, cultural outposts, and entertainment venues, the Brooklyn campus provides easy access to endless inspiration.

Regardless of your medium of expression, there are many schools with academic environments and social scenes that will be a great fit for you. Animation is a growing field and whether you want to work your way up or bolt to the forefront of the industry, these five schools are an excellent starting point for your college search. We wish you all the best in the admissions process;  to infinity, and beyond!