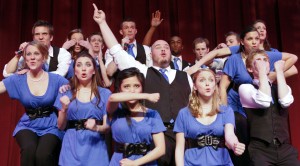 Students all over the country are singing the praises of Glee, FOX’s smash-hit comedy-drama that chronicles the lives of high school glee club members. The first show of its kind, Glee has awakened the musical interests of students across the country. Whether you’ve been belting out notes for years or are just discovering your vocal talents, there are many colleges where you can get a degree in any field you choose while also channeling your inner Rachel, Finn, or Kurt. Though you’re probably familiar with the immortal legacies of the Yale Whiffenpoofs and the Princeton Footnotes, several lesser-known incarnations have shaken up the college singing scene. To help you with your college search, the expert counselors at IvyWise have developed a list of schools with exceptional vocal groups.

Described as “NYU’s hottest, rock-out, co-ed A Capella group,” the N’Harmonics perform genres ranging from rock to pop to jazz, and have covered a diverse sampling of artists, including the Allman Brothers Band, Prince, and Radiohead. The group performs at popular music venues throughout New York City, in addition to competing in collegiate singing competitions around the country. Alumni have gone on to sing on Glee, and have been featured in Broadway shows such as Mamma Mia, Wicked, and Hair.

Interested in exploring other areas of performing arts at this private university? The NYU Tisch School for the Arts offers academic programs in acting, dance, design, drama, performance studies, film, writing, and music. If you’re considering a career in performing arts or theater management, you’ll also want to check out NYU’s Skirball Center for the Arts. This performing arts venue in lower Manhattan offers more than just entertainment: the center often provides internships to NYU students.

NYU prides itself on its diversity, and the undergraduate student body is comprised of students from all fifty states and more than 130 countries. With students from so many different backgrounds, it’s no wonder that NYU boasts an impressive 450 clubs, ranging from the Urban Planning Student Organization to LGBT organizations, leaving no shortage of activities to keep students of all interests busy. Students study at one of the twelve schools within the university covering specialties ranging from dentistry to the ancient world and from fine arts to social work. Students can also design their own curriculum through the Gallatin School of Individualized Study.

University of Southern California: SoCal VoCals
Los Angeles, CA
The SoCal VoCals, who recently celebrated their 15th anniversary, are one of seven a capella groups at USC. This co-ed group features fifteen students who sing a variety of pop, rock, and jazz songs, and have released six full-length albums. When they’re not in the recording studio, the SoCal VoCals perform at some of Los Angeles’ top venues, including the Staples Center, the Rose Bowl, House of Blues, and many others. The group regularly competes in the International Championship of Collegiate A Cappella, and has been featured on NBC’s TODAY.

Stretched across the University Park neighborhood of Los Angeles, USC offers students access to some of the nation’s top performing arts venues and shows, including the campus’ main auditorium, the Bovard, which frequently hosts musicians, theater troupes, and lecturers.

The private university takes pride in its “dynamic and culturally diverse” campus environment. The wide range of programs offered includes liberal arts, architecture, business, cinematic arts, and journalism, to name a few. Outside of the classroom, there are 160 recreational organizations for students to participate in, including foreign language, culinary, sports, religious, and many other clubs. USC’s long list of alums includes Mark McGuire, George Lucas, Salvatore Ferragamo, and Macy Gray, covering a diverse range of professions.

Tufts University: Beezlebubs
Medford, MA
If you watched Glee on November 9, 2010, then you’re already familiar with the voices of the Beelzebubs, who provided background vocals for a rival club on the show. Espousing the motto “fun through song,” the group focuses on rap, rock, pop, and R&B songs, and has performed for President Obama, former President Clinton, David Letterman, and other high-profile figures. The group, known to many as simply, “The Bubs,” tours Europe, Asia, and North America, and has released an impressive 29 albums!

Equally as impressive as the Bubs’ track record is Tufts’ academic reputation. Located in Medford, MA (just outside of Boston), this private university is known for its English department (after all, the name “Beelzebubs” is a reference to John Milton’s epic poem Paradise Lost), international relations department, and study abroad programs. The university encourages its students to gain real-world experiences. To that end, the school’s career services counselors are devoted to helping students find internships and jobs in fields such as art, child development, political science, psychology, sociology, peace and justice, and media relations. From the stage to the classroom, Tufts has a range of programs that allows all students to march to the beat of their own drum.

Duke University: Out of the Blue
Durham, NC
Duke University’s first all-female a cappella group, Out of the Blue, has generated quite the buzz in the music community—the ladies have a collection of CARA (Contemporary A Cappella Recording Awards) nominations and wins to prove it. Composed of about fifteen vocalists, the group performs at Duke University basketball games, New York City’s Carnegie Hall, and competes in collegiate vocal competitions across the United States and overseas. Interested in hearing them in action? Their latest album, Flywheel, is available for download on iTunes.

While Duke is home to this talented vocal group, the university is most often recognized for its competitive academics and NCAA athletics. Undergraduates have the option of applying to two schools within the university: Trinity College of Arts and Sciences or the Pratt School of Engineering, ensuring that an assortment of majors is available to students. In addition, more than 500 clubs and organizations, ranging from cultural activist groups to performance groups are available to students at this private university. Students interested in participating in Greek Life have no shortage of options either, as roughly 30 percent of male and 40 percent of female students are involved in Hellenic life on campus. Best of all? Duke admissions operates on a “need-blind” policy, meaning candidates are admitted based on their academic, extracurricular, and social strengths, regardless of their demonstrated ability to finance their education.

Ithaca College: Ithacappella
Ithaca, NY
Formed in 1996, Ithaca College’s premiere male a cappella group may be the youngest group on this list, but it is certainly an impressive troupe. They recently received Best Male Ensemble, Best Solo, and Best Vocal Percussion awards at the International Championship of Collegiate A Cappella. The group has performed live with Grammy-nominated rock group Incubus, and they embark on bi-annual tours, making stops in San Francisco, Washington D.C., New Orleans, Orlando, New York City, and other cities. While their sound is constantly evolving, the group’s “dedication to putting on high energy, fun shows for the entire family” remains constant.

Students can participate in Greek life in one of the three houses on campus, all of which are music-oriented organizations. Originally founded as the Ithaca Conservatory of Music in 1892, Ithaca College still has strong music and arts programs more than 100 years later. In addition to offering renowned communications and physical therapy programs, Ithaca offers both exploratory majors (for undecided students) and a planned studies option (where students can design their own academic programs). As a result, students can take advantage of well-rounded liberal arts and pre-professional curriculums.

Ithaca College alums frequently transfer their performing skills from the stage to the workplace, as many go on to have careers in broadcasting. Students find self-expression through The Ithacaian, the official college newspaper, as well as WICB, the radio station that won MTVU’s Woodie Award for Best College Radio Station in 2009.

There are many schools around the US with academic and extracurricular offerings that are sure to strike a chord with your personal interests. If you are interested in learning more about specific glee clubs and music programs at a college or university, take the reins of your college search by researching options at different schools. You’re sure to find colleges that are your pitch-perfect match.