Presidents were once students too 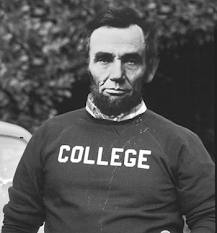 Colleges across the country boast some impressive alumni, and some have had the distinction of educating future Presidents of the United States. Back in 2008, Columbia University was added to this impressive list with the first inauguration of Barack Obama.

It is hard to believe that some Presidents were once freshmen pulling all-nighters, trying to locate their dorms on their first days, and being late to class because of faulty alarm clocks. Okay, maybe not all Presidents had these issues, but most were once just typical students enjoying their college experiences.

In honor of this week’s Inauguration, here are 10 of our favorite fun facts about past Presidents and their college years.

2. Presidents have an affinity for college sports. Teddy Roosevelt boxed for Harvard, Barack Obama played basketball at Occidental College, Gerald Ford was a star football player at University of Michigan, and George H.W. Bush was an accomplished baseball player at Yale.

4. Not only did he serve as US President, but Thomas Jefferson also founded a university. He designed the landscape for the University of Virginia before passing the reigns to another U.S. President, James Madison.

6. Harry Truman is the only President from the 20th and 21st century not to have earned a college degree. He attended a small business school in Kansas for one semester, and Kansas City Law School, now the University of Missouri – Kansas City, for two years.

7. Herbert Hoover and his wife, Lou Henry Hoover, were part of Stanford University’s first class. Lou was the school’s first, and at the time only, female geology major.

8. In addition to being students, some Presidents went on to become professors. James Garfield taught a variety of subjects at Hiram College, William Taft was a law professor at Yale Law School, George H.W. Bush taught administrative science part-time at Rice University, Bill Clinton was a professor of law at the University of Arkansas, and Woodrow Wilson taught politics at Bryn Mawr College, Wesleyan University, and Princeton University. Jimmy Carter is currently a University Distinguished Professor at Emory University.

9. In addition to teaching, Bill Clinton was the first and only President to be awarded a Rhodes Scholarship. He used it to attend University College, Oxford.

10. When James Polk transferred to the University of North Carolina – Chapel Hill his sophomore year in 1816, there were only 80 students. Today there are over 29,000 students enrolled.

Presidents have attended, taught at, and been the leaders of colleges and universities across the country and have acquired a variety of degrees in majors from economics to biology. Imagine that the future President of the United States could be your fellow classmate, eating the same food in the student union or studying in the cubical next to yours in the library. Who knows, maybe the next POTUS is you!